Rookie GM Brodie Van Wagenen promised on day one that the Mets would be aggressive and think outside of the box. A month has passed since that press conference and he wasn’t kidding. The Mets completed a trade that landed Robinson Cano and Edwin Diaz. In return the Mariners got Jay Bruce, Anthony Swarzak, Gerson Bautista as well as prospects Jarred Kelenic and Justin Dunn. Everyone is asking if this is a good trade. It will take years to know for sure, but I will put my neck out there and say NO. I know what the upside is for Diaz and Cano, but nevertheless I think this could go down as one of the worst in franchise history. Here is why-

Cano will not be good until he is 40

While many will say that there have been several guys recently who have played well into their late 30’s, I am not buying it. Sure Beltre, A-Rod and Beltran all had some good seasons after age 35, but all declined before 40. Those who claim that this trade is good are essentially saying that Cano will end up in the hall of fame. This is wishful thinking. Without a DH in the NL, the Mets need to assume that Cano will be an everyday player until his 40’s. This will likely backfire. 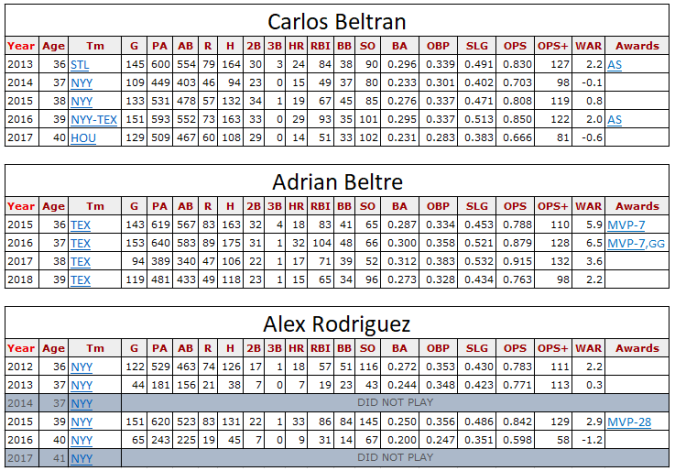 Many are comparing Cano to these three guys. All were able to DH and declined by 40.

The Mets need to get younger

2018 was a disaster since the Mets relied on far too many veteran everyday players. Cespedes (32), Frazier (32), Bruce (31), Cabrera (32), Gonzalez (36) and Reyes (35) were all expected to be key guys. By the end of June, it was clear that this plan was a disaster. For the Mets to now go and bring in Cano is irresponsible. Months ago I wrote an article in which I explained in detail how all winnings teams have a strong young core of everyday players. By trading taking on a guy this old, the Mets are doing the opposite of what winning team do.

Led by Cabrera, Frazier and A-Gon the 2018 Mets struggled in the first half.

When the rumors started, I was shocked. Would Brodie actually get a former client as his first move? Is there some sort of conflict of interest? This seemed too absurd to believe. While there is nothing inherently illegal about this, the optics are terrible.

The Mets got a mere $20 million in salary relief for the remaining $120 million left on Cano’s contract. It is true that when you add the Bruce and Swarzak contracts, the Mets are only paying $63 million total. With that said, Cano joins Cespedes and Wright in the $20 mill club. This is not a particularly productive bunch. Had the initial rumors of $50 million in relief been true, I’d have been satisfied, but it didn’t happen. This could have detrimental financial ramifications for years to come.

By putting Cano at second, the Mets will need to move Jeff McNeil to third. McNeil was great in the second half as he hit .329 in his 63 games. The last time a Met did anything close to that was Reyes in 2011. For the first time in years, the Mets had a guy who hit for a high average for a change. Don’t assume that guys can change positions without impacting their hitting.

Cano is coming off an 80 game PED suspension. I am willing to give him a second chance, but if he gets caught again, it is a 162-game suspension. Normally, this greatly reduces a player’s value, but it seems that the Mets didn’t get the memo.

Did Cano hurt the Mariners?

There was one major oddity with Cano’s 2018 season. While he had good numbers in Seattle, it should be noted that the team was better when Cano was out. There is no simple explanation since Cano hit well, but this does not breed confidence.

There are plenty of closers available

This trade is really about Diaz, who is a win-now closer. He will be 25 on opening day and is under team control for four more seasons. I love the fact that the Mets got him. However, the Mets gave up a lot. David Robertson, Zach Britton, Craig Kimbrel, Andrew Miller and Cody Allen are all closers available whose names are not Jeurys Familia. In other words, this is a buyer’s market and the it seems that Brodie missed that. If the Mets don’t get more bullpen help, this will lead to second guessing.

Did the Mets just get a ticking time bomb? It was reported that Diaz has bone spurs. While it hasn’t been a problem yet, it is not a good sign.

The Mets gave up their highest draft pick in years

There was one saving grace of the 2017 catastrophe. The Mets got the sixth overall pick. In the last 20 years, the Mets have only drafted at six or higher once. Kelenic was regarded as one of the best high school position players if not the best when he was selected. He is projected to be ready in 3-4 years… just when Conforto hits the free agent market. That plan went out the door. If you think high draft picks are overrated, look at the 2014-2015 Royals. They had Alex Gordon (2nd pick 2005), Mike Moustakas (2nd pick 2007) and Eric Hosmer (3rd pick 2008).

Like Kelenic, Dunn is a former first round pick. In 2016, the Mets took him nineteenth overall. The 22-year-old righty is still about a year or two away from making the big leagues. Dunn throws 93-95 MPH and has good stuff. While he isn’t projected to be an ace, experts think Dunn is a middle of the rotation kind of guy. The plan was that Dunn could be a replacement when the current pitching crop is gone, but now that is not an option.

The farm system is much weaker

Once Peter Alonso is called up, the Mets will have only one top 100 prospect left in the system. This means that the Mets will be ranked as one of the worst in the majors. Even if you don’t believe in hording prospects and prefer win now mode, a team needs prospects as bait. If the Mets are good this year and want to improve at the deadline, they will need to trade prospects for stars as all teams do. With few highly regarded prospects left, this could hurt us in July.

The Mets must win now

Most analysts are saying that for this trade to work, the Mets need to make the playoffs in 2019. However, this will be tough. The Braves have a fantastic young roster and the Phillies just improved thanks to the Segura trade. While the Nationals will likely lose Harper, Soto could be just as good. Right now, the Mets look like a third-place team in the NL East.

Mallex Smith was left out

When this trade was first proposed, the name Mallex Smith was thrown around. With 40 steals, 10 triples and a .367 OBP, Smith has the makeup of a great leadoff hitter. The old slow Mets would be a thing of the past. With guys like Smith, Nimmo and Rosario, the Mets could actually be a threat on the base paths. Had Mallex Smith been included, this trade would have been a no-brainer. 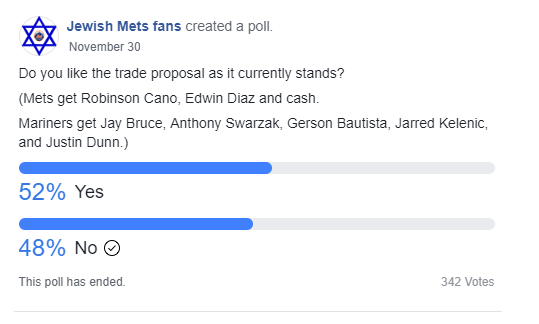 Mets fans are split on how good this trade is.

To conclude, I HOPE I AM WRONG. One day, I want to write a retraction. I think many of my fellow Mets fans are seeing this through rosy glasses. This trade is most certainly unconventional thinking. As discussed in a previous article, Brodie is a mystery box. The Mets are not using the standard playbook, which could be great or burn them. This trade has a lot of potential for greatness but also could end up being an unmitigated disaster.

(David Weiss is a lifelong Mets fan. He has lived in Israel since 2008 and runs the Facebook page Jewish Mets Fans.)

One thought on “A Risky Trade”