The game began with the continued struggles coming from Mets lead off man & 3rd baseman, Jose Reyes. Cabrera followed Reyes with a full count, 1 out double that hooked down the right field line. After another full count by Eickoff, Cespedes would end up striking out on a curveball in the dirt. It was the only curveball Cespedes would see in the whole sequence. Bruce followed Cespedes by just missing a curveball of his own to fly out to right, ending the top half of the first inning.

deGrom wasn’t as sharp as he normally was & it showed in the first inning. He issued his first walk of the evening to the Phil’s lead off man Cesar Hernandez. Howie Kendrick would follow with a fielders choice as Duda was able to cut down the lead runner on a ground out to the big guy.

Odubel Herrera then fought off a lot of tough pitches from deGrom & would eventually bloop a single over Reyes’ head at third. Mikael Franco would then line a base hit to center to load the bases for the newly acquired Michael Saunders.

Saunders would line a base hit to right fielder Bruce scoring Kendrick & moving everyone up a base. After pushing it to a full count, Phillies catcher Cameron Rupp would put the Phillies up by two by taking a walk to force in the run, it would be deGrom’s second walk of the inning as well as his second run given up in the inning.

The Mets then picked up a couple big out when deGrom induced a inning ending 1-2-3 double play with rookie Brock Stassi up at bat. Stassi was still in search of his first major league hit before helping the Mets end the inning.

After Eickoff walked 2 in a row in the top of the second, he was able to get a double play of his own when Travis d’Arnaud grounded into a 6-4-3 double play helping Eickoff get out of a jam.

After giving up a couple of hard hit singles in the third, deGrom was able to get Rupp to foul out to Duda to end the inning stranding Phillies on second & third.

After Cespedes popped one out 2 miles high, Jay Bruce would hit a hanging curveball for a solo shot deep into right center field cutting the lead in half, making it a 2-1 game.

The Mets were able to get runners on first & third for second baseman Neil Walker. He would end up hitting a sacrifice fly to center field scoring Jay Bruce & allowing the Mets to tie the game in the seventh.

Unfortunately d’Arnaud would next fly out to right field keeping runners at first & second, after a intentional walk to Duda. Terry Collins then opted to use Flores over Conforto to pinch hit against the righty Eickoff. Flores would end up flying out to center to end the inning.

The controversy in that call (if there really was any) was if Collins would have opted to use Conforto, it probably would have forced Eickoff out of the game in which he was pitching very efficiently. It may have set up a more favorable matchup assuming the Mets would have then pinch hit Flores for Conforto to set up a lefty-righty match up.

Smoker would then get two quick ground outs to Cabrera to start the inning off, however Hernandez would follow with a two out single. Howie Kendrick then worked the count to 3-1 before Smoker would walk him, putting runners now on first & second.

Terry Collins would make the trip to the mound & make the call for the ace lefty out of the pen, Jerry Blevins with Odubel Herrera coming to bat.

The move would turn out to not matter. Blevins would throw a wild pitch in the dirt but d’Arnaud would keep his glove on it as the ball would land back in his lap as he threw it down to second however Cabrera would catch Kendrick off of first with a throw to Duda to make the tag & put an end to a crazy inning.

Phillies reliever then buzzed Asdrubal Cabrera’s dome with a fastball right behind Cabrera’s head, which he took exception to. Cabrera started to walk out to Ramos as he stared him down however Phillies catcher Cameron Rupp intercepted Cabrera letting him know that Rupp didn’t make that call & stopping him from getting to Ramos. Personally, I found it odd that not a single Met player came out of the dugout but I may be wrong about that.

In September of last year, Cabrera hit a Walk off home run off of Ramos & that could have been the precursor to Ramos trying to bean Cabrera.

Cabrera would eventually reach base via walk, Cespedes would unfortunately follow with a strike out, needing one more out. However, Larry Bowa who was filling in for Phillies Manager who was ejected in the ruckus.

Bowa would call for lefty reliever Joely Rodriguez to face the left handed slugger Jay Bruce. Bruce who generally struggles vs lefties came through big after falling behind 1-2 to Rodriguez. Bruce would take a 1-2 slider & put it over the right field wall as he hit his second home run of the game & the 4th in his first 24 AB’s of this young season.

The home run would break the tie & put the Mets up by two runs late in the 8th inning. Blevins would eventually take over in the bottom half & got into some trouble as he walked Franco & gave up a single to Saunders before TC came out to the mound instructing for Robles to come in & replace Blevins.

Robles would clean up the mess & cover his own butt to make up for a couple of bad outings by getting Cameron Rupp to ground into a 6-4-3 double play to end the 8th inning.

Addison Reed would come out for the fourth time this season to close the game since he’s taken over the role for the suspended Familia, who had 8 games remaining on his suspension.

Stassi would lead off the inning looking for his first career hit would actually end up cashing in his first career home run as he took Reed deep on the 9th pitch of the AB which was a 2-2 fastball over the middle part of the plate. The Phillies would cut into the Mets lead making it 4-3 game with no outs in the bottom part of the ninth.

After going 2-2 to Freddy Galvis, Addison Reed would paint the outside black to pick up the Mets first out of the inning. Nava then picked up a single which could have been a double if it wasn’t for the great hustle by Jay Bruce in right.

Cesar Hernandez would then take a fastball pretty deep in center but Granderson had plenty of room to make the catch for the second out. With Howie Kendrick down to his last strike, Reed would again paint the outside corner, this time to end the game with the tying run for the Phillies on base. It would be Reed’s seconds straight save.

Although deGrom wasn’t as sharp as he normally is, he demonstrated why he’s one of the top pitchers in all of baseball in the last couple seasons. He pitched 6 innings while giving up 2 earned runs in the first while walking two & only striking out three, showing he doesn’t have to blow hitters away to get outs & that’s important to see when you’re a team gunning for NL spot in the World Series.

Player of the Game: 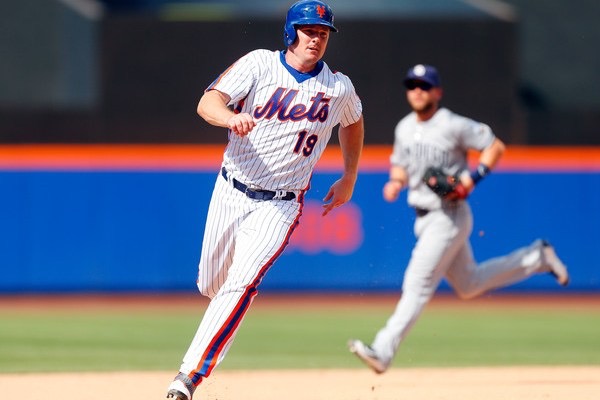